Trump Appointees to the Supreme Court Should Be Impeached  as the fruit of the poisonous tree. 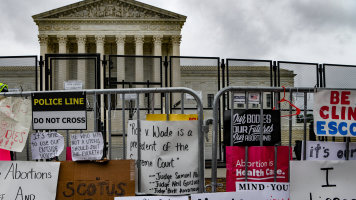 The Supreme Court justices selected by Donald Trump have revealed themselves to be unfit for this exalted sinecure by rejecting established precedent on abortion, dismantling the wall of separation between church and state, allowing mentally deranged killers access to weapons of war, and permitting the ravaging of our planet by stripping government agencies of the power to prevent excess greed and avarice from destroying our only home through climate change and other assaults.

These activist, corrupt justices should be impeached because their decisions violate precedent, ignore the proper role of the judiciary, and are the fruit of the poisonous tree, chosen by a twice impeached insurrectionist, based not on their qualifications to serve justice, but on their willingness to serve Trump’s misogyny.  Trump’s insurrection sought to install himself as a fascist dictator, deriving his power not from the people, but from racist vigilantes like the Proud Boys and Oath Keepers.

By violating his oath of office with an attempted coup, Trump should be retroactively denied the perk of selecting the highest judges in the land.  His “America First” slogan adopts the name of the pro-Nazi movement in America whose goal was to keep America out of WWII to let the Nazis completely annihilate the Jews and conquer the world. America First is the English equivalent of Deutschland Uber Allea and today, as well as in the past, consists of white supremacist racist thugs.

Moreover, all of Trump’s nominees should be impeached for lying in confirmation hearings when they said they would follow Roe v. Wade and instead of following solid precedent, they followed a sordid President.  Reagan famously said “Government is not a solution to our problem, government is the problem”, and ever since, Republicans have sabotaged our nation from within by electing Presidents who hate government.  They appoint oil and gas barons to run the EPA, health industry tycoons to monitor health care and abolished the Department of Science to allow greed to prevail over reason, kindness, concern for the poor, health care, the environment and the best interests of Americans.

The apotheosis of this cynical effort to destroy American democracy is Donald Trump who showed contempt for our government by bragging that this billionaire does not pay taxes because he is smart. If everyone followed his example it would end our democracy. Trump’s MAGA stands for “mutinous, anarchists governing America” and he sought to dismantle NATO, America’s best defense.

Trump abused women, bragged about it and then called his victims liars when they came forward.  This self-admitted serial abuser of women selected justices on the Supreme Court to codify his abuse of women into law by ending the right to abortion in America. The decision to overturn Roe v. Wade, emasculate the EPA, and to appoint climate deniers to lead environmental agencies, indicates that every woman touched by Trump, including Lady Justice and Mother Earth, has been debauched.

I am also a “doubting Thomas” when Clarence Thomas said he had no opinion on Roe v. Wade to get confirmed.  He should also be impeached for not recusing himself when he was the lone dissenter in a case that ordered Trump to turn over records of his co-conspirators, that included Thomas’s wife.

Rabbi Abraham Joshua Heschel, a refugee from Nazi Germany said, “In a free society, some are guilty, but all are responsible”.  Let us learn from the past and speak up while we can, to demand the impeachment of these dangerous, unfit, unqualified judges to restore justice to America.